Brandon Marie Miller earned her degree in American History from Purdue University, where she also studied art history. Her love of history began early thanks to her parents, both teachers, who encouraged her to walk in the past’s steps at national parks, historic sites, battlefields, and museums. Today, Brandon writes about famous people and common folk, about great events and everyday life. Brandon encourages readers to think of history as the greatest story of all. Fiction has nothing on history for tales of courage, sacrifice, redemption, cruelty, and betrayal. Brandon aims to inspire readers with stories of people who have struggled, overcome great odds, and made a contribution to our human spirit. Raised in Park Forest, Illinois, Brandon lives in Cincinnati. 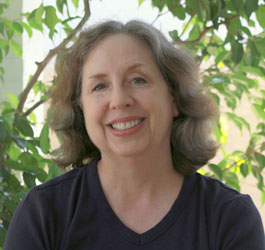 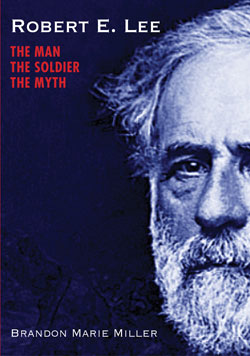 ROBERT E. LEE: THE MAN, THE SOLDIER, THE MYTH (2019): Robert E. Lee draws on many facets of Lee’s character using his own words, and the words of his contemporaries. From family scandal to brilliance at West Point, the Mexican War, the Civil War and Reconstruction, Lee is shown as a doting father, a husband, a man who did not believe in secession, but who did believe in white supremacy and the institution of slavery. How have the myths of Lee spread in the decades after the Civil War shaped our nation’s memory of that war? As our country re-evaluates symbols like Confederate monuments, a new look at Lee’s life is a timely story. Includes a family tree, timeline, author’s note, and extensive source notes and bibliography. (Ages 14+) 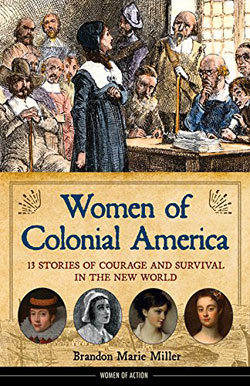 WOMEN OF COLONIAL AMERICA: 13 STORIES OF COURAGE AND SURVIVAL IN THE NEW WORLD (2016): In colonial America, hard work proved a constant for most women—some ensured their family’s survival through their skills, while others sold their labor or lived in bondage as indentured servants or slaves. Yet even in a world defined entirely by men, a world where few thought it important to record a female’s thoughts, women found ways to step forth. Elizabeth Ashbridge survived an abusive indenture to become a Quaker preacher. Anne Bradstreet penned her poems while raising eight children in the wilderness. Anne Hutchinson went toe-to-toe with Puritan authorities. Margaret Hardenbroeck Philipse built a trade empire in New Amsterdam. And Eve, a Virginia slave, twice ran away to freedom.

Using a host of primary sources, author Brandon Marie Miller recounts the roles, hardships, and daily lives of Native American, European, and African women in the 17th and 18th centuries. With strength, courage, resilience, and resourcefulness, these women and many others played a vital role in the mosaic of life in the North American colonies. (Ages 14+)