Thrity Umrigar is the best-selling author of the novels Bombay Time, The Space Between Us, The Secrets Between Us, If Today Be Sweet, The Weight of Heaven, The World We Found and The Story Hour. She is also the author of the memoir, First Darling of the Morning and a children’s book, When I Carried You in My Belly. Her books have been translated into several languages and published in over fifteen countries. She is a Professor of English at Case Western Reserve University in Cleveland.
The Space Between Us was a finalist for the PEN/Beyond Margins award, while her memoir was a finalist for the Society of Midland Authors award. If Today Be Sweet was a Chautauqua Literary and Scientific Circle selection, while her other books have been Community Reads selections. Secrets is an Indie Pick. Thrity is the winner of the Cleveland Arts Prize, a Lambda Literary award and the Seth Rosenberg prize.
Thrity was born in Bombay, India and came to the U.S. when she was 21. As a Parsi child attending a Catholic school in a predominantly Hindu country, she had the kind of schizophrenic and cosmopolitan childhood that has served her well in her life as a writer. Accused by teachers and parents alike of being a daydreaming, head-in-the-clouds child, she grew up lost in the fictional worlds created by Steinbeck, Hemingway, Woolf and Faulkner. She would emerge long enough from these books to create her own fictional and poetic worlds. Encouraged by her practical-minded parents to get an undergraduate degree in business, Thrity survived business school by creating a drama club and writing, directing and acting in plays. Her first short stories, essays and poems were published in national magazines and newspapers in India at age fifteen.
After earning a M.A. in journalism in the U.S., Thrity worked for several years as an award-winning reporter, columnist and magazine writer. She also earned a Ph.D. in English. In 1999, Thrity won a one-year Nieman Fellowship to Harvard University, which is given to mid-career journalists.
While at Harvard, Thrity wrote her first novel, Bombay Time. In 2002 she accepted a teaching position at Case Western Reserve University She also does occasional freelance pieces for national publications and has written for the New York Times and the Washington Post’s and the Boston Globe’s book pages.
Thrity is active on the national lecture circuit and has spoken at book festivals such as the L.A. Festival of Books, the Tuscon Book Festival and the Miami Book Fair International; at universities such as MIT, Harvard University, and Spelman College; and before literary societies, civic and business organizations and public libraries all across the country. 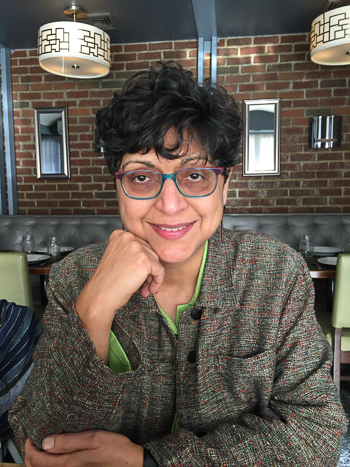 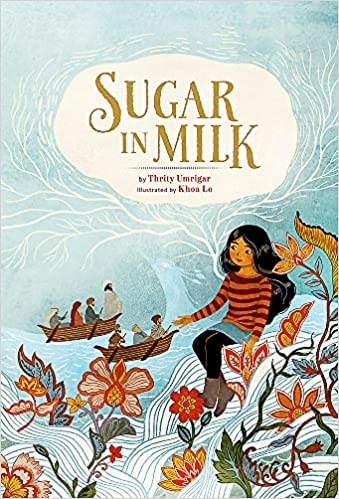 When I first came to this country, I felt so alone.

A young immigrant girl joins her aunt and uncle in a new country that is unfamiliar to her. She struggles with loneliness, with a fierce longing for the culture and familiarity of home, until one day, her aunt takes her on a walk. As the duo strolls through their city park, the girl’s aunt begins to tell her an old myth, and a story within the story begins.

A long time ago, a group of refugees arrived on a foreign shore. The local king met them, determined to refuse their request for refuge. But there was a language barrier, so the king filled a glass with milk and pointed to it as a way of saying that the land was full and couldn’t accommodate the strangers. Then, the leader of the refugees dissolved sugar in the glass of milk. His message was clear: Like sugar in milk, our presence in your country will sweeten your lives. The king embraced the refugee, welcoming him and his people. The folktale depicted in this book was a part of author Thrity Umrigar’s Zoroastrian upbringing as a Parsi child in India, but resonates for children of all backgrounds, especially those coming to a new homeland.