Paul Orlousky worked in broadcasting for 50 years and 5 months and built a reputation as an aggressive reporter specializing in investigative stories. He started in 1969 as a radio disc jockey in his home town of Elmira, NY, then switched to television in 1972. He worked as a news reporter, anchor, and morning show host in Binghamton, NY, and Youngstown, OH, before landing in Cleveland on WEWS TV (Channel 5) in 1981. For the next 38 years he was a fixture on nightly Cleveland TV newscasts. At Channel 5 he was a reporter on “Eyewitness News” and “Live on Five.” He moved to WKYC (Channel 3) in 1985 and formed an investigative unit called Target Three, establishing his reputation with prominent investigations of police misbehavior. In 1997 he joined WOIO (Channel 19), where he became closely associated with the station’s Action 19 News brand. He also covered breaking news and politics, including national politicians visiting Ohio and local politicians on the national scene. He retired in 2019. 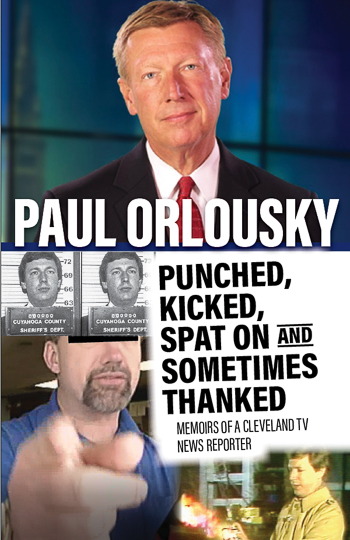 “I was a TV news reporter for almost fifty years, most of them in Cleveland, specializing in investigative reports. During that time I saw a lot of things. Historic events. Horrific crimes. Bizarre behavior. Heartwarming deeds. And sometimes just hilarious, silly stuff . . .”

That’s Paul Orlousky. After five decades on Cleveland TV (nightly on channels 3, 5, and 19), this veteran newsman has a lot of stories to share: What went on behind the camera . . . Racing to the scene in a tiny helicopter or crouching inside a sweltering news van on a stakeout . . . What he heard in a judge’s chambers or a courtroom lobby after a tense trial . . . How the internal workings of a news operation shaped the reporting viewers saw onscreen . . . Threats from angry subjects of an investigation, like shady business owners, politicians, and sometimes even cops . . .

Yes, over the years, Orlousky got a lot of threats―and more. He was yelled at, punched, kicked, spat on, menaced by dogs . . . But he was also thanked―many more times―by regular people all over Northeast Ohio for digging into stories that mattered to them. Now, Orlousky shares his favorite behind-the-camera tales in these short, candid, informative, and often funny stories.

“My approach to life is simple,” Orlousky writes. “You can look at it either as a tragedy or a comedy. I chose comedy, in part because that was a way to get through many of the tragic situations I reported on and that people I encountered were forced to deal with.”

If you’ve ever watched local TV news, you’ll enjoy these backstories behind the news stories. You’ll get a few chuckles, and might even wind up a better informed news consumer.